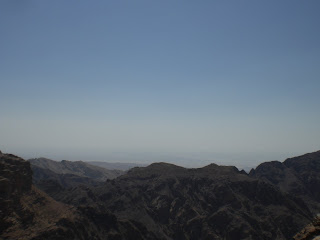 The Capital of Fear

- juli 26, 2009
I'm back home at last, but still a bit confused as of where I am. To keep up with this sentiment of being both here and there at the same time, I publish another version of a text on Jerusalem. For as my Swedish-speaking friends have seen, I wrote a couple of texts while I was there. I translated the first one of them into English a little more than a week ago, but I failed to publish it. As English isn't my native language, it's not like reading the original , but here - on demand - is The Capital of Fear: Jerusalem is not a city it’s a war zone the machine guns revealing peoples’ fear for each other Seen as a capital by two nations but as a matter of fact a capital of one, undived nation the Nation of Fear It’s in the eyes of every Jerusalemite the badly hidden fear for The Other The settler walking up the stairs to his apartment looking the other way with two security guards in his service very conscious that it’s only violence and the threa
Skicka en kommentar
Läs mer

If I could turn back time...